The letters of support he received from the mayor probably assisted Herman’s case as it was decided that he would be taken from Camp Vught. But instead of a release, on 9 September 1943, he was transferred from Vught to Utrecht (Cell 64), the act of sabotage clearly did not sit well with the Germans.

He was imprisoned there at the Prison Wolvenplein (Deutsche Untersuchungs- und Strafgefängnis). This was a Dutch prison used by the Germans for saboteurs, spreaders of forbidden literature, caught in possession of a radio, etc.

Upon arrival in Utrecht it was also discovered that he had the cotton cloth with his prison number from Vught with him. This was stealing from state property, which was punishable by death. To intimidate him, he was several times placed on death row.

Almost daily he was interrogated about his act of sabotage; in particular, the Germans tried to find out whether a resistance group was active in and around Ootmarsum. Although he told little about those two months in Utrecht.  When we talked with him about it much later, it was easy to conclude from his remarks that the time in this prison had left deep wounds, most probably this period was far worse for him than the time in Vught.

The only thing he talked about from this period was that he was placed with several other prisoners in the cell and that he hated the open bucket that was used as a toilet, because it stank so much.

On 2 November 1943, the court hearing took place before the German ‘Obergericht’ in The Hague. Others were allowed to be at the trial. His sister Annie was there and his friend Henny Lohuis, the other two on the picture are unknown. 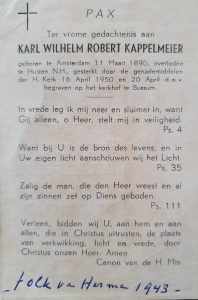 Sjaan Stavermans, a teacher in Ootmarsum, was friends with Willy Kappelmeier, a judge at the lower court in Germany. The advantage of Willy was that he had dual nationality. Herman’s father contacted him and arranged for him to take on Herman’s defense, replacing Mr. Ravenzwaai the lawyer who had been assigned to Herman by the German Court.  Willy also took on the task of interpreter. Herman was fluent in German, but Kappelmeier wanted to translate his answers ‘creatively’. This was made clear to my dad through hand signalsand body language when he walked into the courtroom.

Thanks to this arrangement and with the emphasis on ‘youthful age’, Kappelmeier managed to get Herman acquitted. The words: “Sie sind endlassen” (you are released), are I think the most beautiful words he has heard in his life. Willy Kappelmeier has always remained a family friend and was widely praised for his handsome lawyer work.

Tired and underfed, Herman Budde arrived in Ootmarsum, where he was welcomed at the municipal border by many friends and acquaintances, including mayor Schimmelpenninck van der Oye. Here he received the ‘Freedoms medal’ of the City of Ootmarsum.

Herman’s friend Henny Hulshof also played an important role for the Budde family, during this difficult period. He is also in the photo taken in the garden with the rest of the family after Herman’s release. He was a great support for Herman’s father and mother.

The final court appearance was on 14 January  at 9 am.

In the archives of the Netherlands Institute for War Documentation there is also a letter from Der Genaralkommissar fur Verwalting und Justitz (25 January 1944) to the Ministry of the Interior in Apeldoorn in which the above is confirmed, but the ministry is asked: “das Budde von Ihnen nochmals ernstlich verwarnt wird”.

On 1 February 1944, the Ministry called the mayor of Ootmarsum to confirm that Herman had indeed been released. On the same day he confirms this by letter to the Ministry and further refers to an attached copy of an official letter on this subject from lawyer Mr. F.P.Ravenswaay (the letter from this lawyer is also present in Herman’s archive – number 52)

Next: War year 1944 – Herman’s second arrest and deportation to Germany