Anny starts writing about the news in her diary, but no personal events in this year. She now understands that this is not a quick war, nor are the Nazis leaving the Netherlands alone. The wars around the world are only getting worse. The Dutch East Indies are now also occupied. She mainly reports on all of the various war activities

Landwacht Nederland (Land Guard) was a paramilitary self-defense organisation set up by the Nazis, they assisted the occupational force to “control” the population, which was expressed in acts of terror against civilians. They were formed from the local NSB members. In Ootmarsum the local groups commander was Dirk Jan (Dick) Kip, described in his trial after the war as a power hungry, macho person and the gang was known as Group Kip. He was one of the most notorious NSB members in town, his family (all NSB members) had a hotel right opposite of the Budde’s in the Market Street. They had the Nazi flag hanging on their façade and SS commanders were welcome guests here. During the liberation he and his father tried to flee to Germany, but were recognised and arrested, After the war he was sentenced to 15 years imprisonment (but only served 8 years). 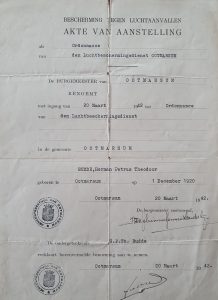 On March 20, Herman received an appointment at the Air Protection Service.

Here is an overview of this activity as described in the book Ootmarsum 1940 – 1945.

Already in the first year of the war, an Air Protection Service was set up by order of the German occupier. This service consisted of several elements each with their specific tasks. One component was noting all the dogfights and bombings that took place within the area of the municipality with date and time. Afterwards, these data had to be reported to the mayor, the head of the Air Protection Service, Mr Strasbourg and to the local constable. If a plane was heard at night, it had to be noted by the guard post on duty. That such a guard post, especially in the beginning thought to hear more, than there actually was, is proven by the notes of 16 April 1940:

The Air Protection Command Post was in the town hall. In its tower was a lookout was made. Another lookout was on the water tower on the Kuiperberg. The town hall also housed the so-called Radio listening station. Obviously having access to this equipment and the various bits of information that would be collected here would also be valuable for other (resistance) purposes.

Messages from other parts of the Netherlands were received via that radio, which dealt with overflying bombers. Based on this, an approximate flight path could then be determined.

The command post was mainly occupied the first time from evening 19:00 to 07:00 in the morning.

Next: War Year 1943 – Herman’s arrest over the radio equipment affair