Buddes at the Royal Court in Copenhagen

Before 1570 the brothers Matthias and Godslev Budde had moved from their ancestral home in Neetzow (see Pommern) to Denmark. They must have been able to build up a name and reputation for themselves, as noblemen coming from another country they received positions at the royal court. They built up close ties with the Danish Royal Family especially with King Frederik II (1557-1632) and Queen Sophia (married in 1572).

Godslev also accompanied the Danish princess Anna on a trip to Scotland. Matthias held several diplomatic positions and represented Denmark or Danish matters in England and in Poland.

Denmark in the 16th century

The Denmark of today was only a small part of the huge kingdom which Christian III took over in 1536 after victory in the civil war. At that time, Denmark included Scania, Halland, Blekinge, Gothland and Oesel. Furthermore, Norway and its extensive North Atlantic possessions (the Faroes, Iceland and Greenland) had formed a personal union with Denmark since the Kalmar Union was established in 1397. The section concerning Norway in Christian III’s coronation charter emphasised that Norway was as much a part of Denmark as Jutland. Furthermore, the Oldenburg monarch was Duke of Holstein and also Duke of Schleswig, which was under an oath of fealty to the Danish Crown.

Godslev also became the vassal of the monastery of Borglum (it became a manor after the Reformation 1n 1536 but is still today called a monastery) , while Matthias became the vassal over the deanery of Thyholm. Godlev’s son Friedrich, studied in Copenhagen and Rostock (Pommern) and became Chef of the military regiment of Trondheim in Norway, where he died and was buried in the town’s cathedral.

I also received the following information in relation to Mathias. He worked as a mediator between the two kings during this war. Here are two abstracts.

” Meanwhile Johann Behr returned to Pilten with a Danish legate, Matthias Budde,[113] who had been ordered to go to Poland. (Budde later became the royal governor of Arensburg on Ösel, but he was deposed soon thereafter.) Behr not only brought a favorable response from the Danish king, but also several artillery pieces, shot, powder, materiel, etc., with which to better preserve the arrangement. The people of the diocese were so emboldened that they most carelessly and rashly set out after the knight Oborsky…”

“During this warfare in the diocese the two kings sent legates back and forth, making arguments pro and con, each of the kings lodging accusations against the other. Matthias was sent to Poland to argue the case of the King of Denmark, namely that the king and his predecessors had had right and claim to the diocese in the time of the first settlement of the lands of Livonia. [120] The King of Poland for his part based his case on the right of possession and said that this right should not be challenged or disputed in spite of the fact that some subjects were in rebellion. He offered to submit the matter to arbitration, confident that he could justify his claim on the basis of the right of actual possession. [121] When the royal and illustrious Margrave of Prussia, Georg Friedrich, saw that nothing could be achieved through this dispatching back and forth, writing and rebutting, and exchange of hostile words, [122] since hard stones are rarely ground down, he intervened as a peace-loving prince and offered to act as intermediary for the sake of the poor diocese and also so that these two mighty potentates not become further entangled in misunderstandings.”

For more information on Matthias and Godslev see also Estonia. One of Godlev’s daughters is mentioned below (Rodslet).

There is another later link with Denmark. Wilhelm Adolf Budde (great-grandfather of Lis Budde). He was born in Jutland in 1858. lived in Elsinore, and in their family the saying goes, that he was the son of one of the German farmers who brought the potatoes to Denmark – in the middle of the 18th century. The German “potato farmers” settled in the parishes Frederiks and Kragelund on the moor south of Viborg in Jylland/Jutland.

On October 20th 1885 the parish register of the St. Mariae Church in Elsinore lists him as a journeyman and painter aged 27, when he marries the domestic help Ingrid Maansdotter Fagerstroem (aged 30) from Osby in Skaane.(Sweden).

I have finally found my German ancestor! He was not a potatofarmer from Pommern, but a hoseweaver from Münster in Westfalia.

His name is Franz Friedrich Wilhelm Christian Budde, he is my great-great grandfather, and he was born in Münster in 1819. I found him in Ancestry.com, but I have no information about his parents.

Franz emigrated as a widower to Jutland in Denmark in the late 1850’ies, and in 1857 he married my Great-great grandmother Anna Marie Stoltz, who came from Sweden. Stoltz is a Swedish soldier’s name.

Franz Buddes story is a sad one… I have just found out that he committed suicide in Aarhus Jail on 12th of July 1867. He had committed “field theft” – perhaps he stole a horse or a cow. Poachers and cattle thieves were always punished very hard. So he took his own life – leaving a wife and 4 children from 1 to 10 years.

Franz and Anna Marie Buddes eldest son is my great grandfather Wilhelm Adolf Budde. He was born in Östbirk in Jutland on November 1st 1857. He was trained as house- and carriagepainter, and took residence in Elsinore where he met and married my Swedish – again! great grandmother Ingrid Maansdotter.

I have seen in your home page, that there are other Buddes from Münster, but I don’t think that I’m related to them.

As to Franz Budde, my guess is that he was sort of the black sheep of the family.

On the Danish island of Lolland Torsten Budde pawned in 1423 a farm in Dollefjelde to Oluf Pedersen. In that same year he lived in a mansion in the same place, together with his son and son in law. He sold this to Niels Madsen. He had a son Claus and a daughter Elsebe.

Axel Budde was mentioned here in 1454. He has three children Axel Budde mentioned in 1475 in a document together with his stepmother and custodian Axel Axelsen. He was a judge from 1462 – 68 in Langeland, an island west of Lolland, between Fyn and Sjaelland. He was mentioned inn 1480 as the Prior of the monastery in Vennebjerg in the northernmost past of Jutland. In that year he rented three farms to the priory.

The other two children, Markvard Budde and Karine Budde, were both mentioned in 1475. Three children of Axel’s 2nd marriage were Also mentioned in that year: Laurids, Anne and Edele.

The family had as a coat of arms a twig and 3 stars (see under Budde 1: www.svenskadel.nu/Danheralds/index.asp

The information below comes from Gunnar Krosbøll. 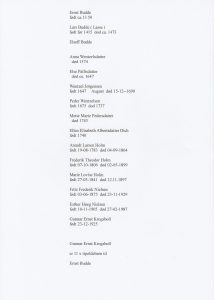 Dorte Godslavsdatter Budde was born after 1580 in Rodslet. She married Iver Fris who was born in Orbaek. They had three children of whom 2 were born in Oxholm. Dorte’s father is Godslev mentioned in the royal court chapter above.

Carl Christian Leopold Gether Budde ( 15. april 1836 in Holbaek – 24. august 1902 at Himmelbjerg farm) by Ry was a Danish author. He was born in Holbaek , but grew up in Vendsyssel (Jutland), where his father was pastor. At age 14 he came to Randers Latin School and began here to practice poetry. He graduated in 1854 and wavered between different studies, but finally had to stop and went home to his father, who was now pastor of Sengeløse on Zealand .

With his first story: Five days in Vendsyssel he approached Hans Christian Andersen, who received the poet with kindness, but advised him to work on his career for   a few more years. The story was first published in Berlingske Tidende in 1860 . He gave up poetry as his next publication Vaudeville Shame Tak was a failure. For his own interest he wrote: A youthful story”   that a friend got him to send in the newspaper Fatherland . It received  good reviews and he again took up his  authoring  profession.

1871  Most widespread work: the Fatherland (A youthful history, feuilleton, anonymous)

Most famous publication: Danish Fairy Tales: A Collection of Popular Stories and Fairy Tales from the Danish (New York: Harper and Brothers, 1899).

There is tomb in the Gl.Rye church of Leopold Budde and wife Mathilde tomb.

The following website http://www.danishfamilysearch.dk/ has a search facility and if you key in ‘Budde’ you will find dozens of Budde’s listed since 1701.